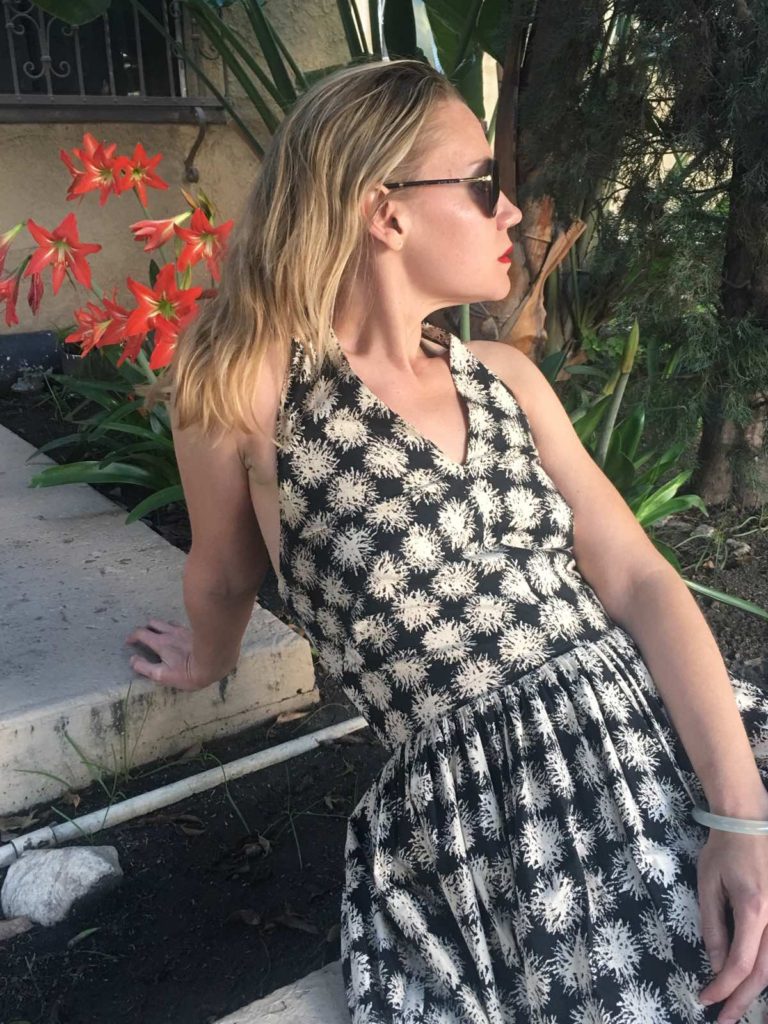 Note: This is a repost from Fashoinista, you can see the original here. The author is Maura Brannigan and when I read it I fell in love. Many of us suffer with anxiety and depression. I’m not immune to that. My anxiety can make many things difficult, and there are times when planning my outfits gives me peace. Especially now, when we are all a little stressed, I can’t help but come up with various outfits to wear (where I would wear them to is another story!). I related to this article and I hope you do too! XO RA

When I was in fourth grade, I realized I could not, for lack of a better phrase, see shit. It occurred to me abruptly, in the middle of a math lesson. My table was in the mid-back of the classroom, and as my teacher was doing whatever she was doing on the overhead projector, I began panicking when things I should have been able to read appeared blurry, like someone had sneakily slid Vaseline over my eyeballs at recess. My tiny body felt hot and immobile, suddenly much too big for its chair; if I willed myself just so, I wondered, could I drop through the linoleum and leave a searing hole in my place? At least that way, none of my classmates would have to see me in the inevitable, which I knew to be glasses.

Sure enough: I emerged from LensCrafters several days later, bummed about my newfound ailment but also absolutely amazed at the detail I could now see. (“Leaves!” I remember announcing to my dad as we left the store. “They look like that?!”)

I see now that this was, probably, one of my earlier panic attacks. There were other incidents, too, like my first day of kindergarten when I sat alone, my social anxiety revving up while I silently, maniacally brainstormed conversation topics I could present to my new peers. My anxiety has always been there. It sits on my shoulder, alerts me that something is off and then vacates the building. It is very flighty. But it has legs.

Like so many people with anxiety, or with depression, or with any number of mood disorders, I find my security in plans. I’ve never met a list I didn’t just devour. And as with so many others, my anxiety is often triggered when I’m thrown off schedule. When I sense my symptoms — sometimes mental, like a weird, morose dread, or sometimes physical, like shortness of breath or stomach knots — I take comfort in pattern. Much has been said in recent years about how elaborate beauty routines, sometimes Korean ones, can help fight depression. I get that wholly.

When I was younger (and there was also much less visibility surrounding mental health), I deduced on my own that if I could regulate every last element of what was happening on the outside of my body, it could have lasting effects on what was going on inside that makes me want to barrel through floors. Even today, my obsession with the fashion and beauty industries is inextricably linked to my expectation that looking nice, looking exactly what I want to look like, will leave me, finally, feeling at ease.

The degree to which I go about planning is methodical at one end of the spectrum and neurotic at the other. There was the year that “The Parent Trap” was released on VHS, and my 10-year-old brain became so embarrassingly infatuated with Hallie Parker that I took pen-to-paper notes on her wardrobe each time I watched. There was my first day of seventh grade in which, after a summer of intensive mood-boarding, I showed up to school in a truly wild, 1970s-inspired ensemble complete with bell bottoms and brown suede boots. My efforts backfired, and I was snickered at with such gusto that I felt I had no choice but to change into my gym clothes. (I wasn’t so much upset, per se, as I was frustrated that my classmates didn’t yet know how to appreciate a proper “lewk.”) There was the month-long stretch — I was, maybe, 15 — when I decided having Pantene Pro-V commercial hair would eliminate all my adolescent woes. When I realized that it did not and it would not, I felt like I had been stabbed in the back by that very shampoo bottle.

My relationship with fashion and beauty products has helped me cope. And over the years, I’ve accumulated a collection of stuff — skin-care, aromatherapy, supplements, whatever — that I’ve turned to time and again to make me feel in control.

Most of that regimen has some physiological benefit, as I’ve learned through years and years of product testing. Bedtime is my scariest time; it can take what is essentially witchcraft to get me asleep. I keep a lavender sachet on my bedside table, which I let sit on my chest for a few minutes when I first climb into bed. I love a pillow spray, as well, the most effective variety of which I’ve found to be the mega-popular Deep Sleep Pillow Spray with lavender, vetiver and camomile from This Works. The hype is not misplaced; after several months of use, the brand’s name holds up.

Mornings, though, are easy. I began taking Ashwagandha, an adaptogenic herb popular in Ayurvedic medicine, with my breakfast about two years ago, per the recommendation of my doctor. (Obviously, supplements aren’t for everyone, and you should always check with your own doctor before starting them.) Both Google and my doctor say that Ashwagandha helps lower cortisol, balance thyroid hormones and combat stress. I say that, yes, it does do that, but I don’t know if it’s the placebo of taking, doing, planning that helps more.

Some evenings, I would come home and immediately lie down on the kitchen floor, not bothering to take off my coat or scarf or hat. If my partner was home, he and our dog would join, three warm bodies sardined between the stove and sink. That guilt, of feeling him planking next to me when I knew that he, too, didn’t know how to help me, was worst of all.

I would get up, eventually. And soon, it became days, then weeks, then months, since my last time on the kitchen floor. I just kept doing what I knew worked: letting objects, like hand lotion that smells like my mom, work their material, aspirational magic, and healing from the outside in. An advertiser’s dream.

I feel guilty for that, too. Fashion and beauty products are, of course, just “things.” But we all know “things” can also carry real, emotional weight and become so much more. Why should I judge myself for what I find and have always found to be constructive?

Right now, I’m working on my own wellness practice, like meditation — I enjoy the “Calm” app — and 4-7-8 breathing. But I’ve found that the very best thing I can do for myself is to stare my anxiety, and the guilt that comes with it, straight in the face — not to embalm it in lavender or distract it with 18 tabs of suede mules that, in some strange way, might make each hard day feel more navigable. Absolutely everything changed when I began accepting my anxiety for what it is, not trying to fix it like something I could tend with a Band-Aid — how one might fix a fourth-grade astigmatism with a pair of glasses from LensCrafters.