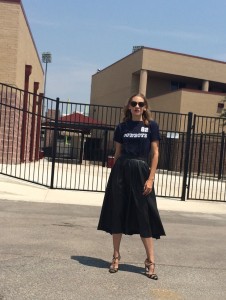 Fall is coming and I love it for many reasons–the cooler weather, the holidays, and football. You may have caught on that I’m a big football fan, I was raised on it and come from a long line of men and women who love football and have made watching it an almost religious experience. However, there are times when being a female football fan isn’t easy.

Even if you’re not a football fan you can’t help but notice that both the NFL and the College system have issues with domestic abuse, rape, and the handling of the men who commit these crimes. Being a female who believes that there is no excuse for this behavior and someone who is a huge fan of the sport it often leaves me in a difficult position. I don’t have answers. I’m a Cowboys fan and I hate that we signed Greg Hardy. Jerry Jones wouldn’t take my calls about that issue. Recently in my college team’s conference a young man with a known history of violence transferred to a school where he subsequently raped a young woman–I believe the coach and school should be held accountable. But I love the sport. As much I want the men who commit crimes off the field–I love watching the game. It is a hard line to balance that I sometimes struggle with–and again I don’t know that I handle well. My thoughts below are not meant to diminish the seriousness of the issues with women in the NFL or a sign that I ignore them. I simply don’t have the words. Here and here are articles about the situation if you care to read. I’m also well aware of some of the race/kneeling issues in the sport. I don’t know that it’s my place to speak (and there are so many people who can speak on those issues better than I can), but I think people using their platform is amazing. And we should all be on the side of equality.
Now to things I can speak to.
More than once I’ve said I love juxatipositons. And I do. I’m an artist, fashionista, and a football fan. My turn-ons involve both opera and action movies. I think that we’re all complicated and no interest makes you dumb. Not only does this mantra apply to fashion but to football. I can’t tell you how frustrating it is as a woman to tell people you love football and have people assume that you’re saying that to be attractive to a guy (not true). Or that you really don’t know what you’re talking about–ask me my opinion on the 4-3 defense. Or that you use football as social time–ask me questions or try to have a deep conversation during a game and see how well that works for you. Or that most of the gear for women involves sequins and pink–yes, NFL I’m looking at you, and yes it’s getting better, but I’m a fan, not a Barbie. So yes, I am passionate about it. But that doesn’t mean I will shove it down your throats (I swear, even though I’m so excited for this season!)

I can tell you that if you want football rantings following me on twitter @adeliciamorris is a place to get them. And that every Friday my college team (TCU) has “Go Purple Friday” and every Friday on my instagram I will be sharing my purple. Most of the time it looks like this: 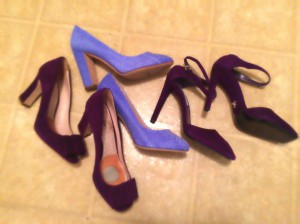 as I sometimes interpret the day as “wear amazing purple shoes day”!
I do hope that if you celebrate the season or not that the following weeks go your way (unless you’re rooting against my teams) and again I promise not to make this page football central.