I began writing this piece in 2018- 2 WHOLE years ago, but never hit publish because I felt like I never got what I wanted to say right. Now, with Sex and the City Rebooting on HBOMax, I can’t help but think not only about what I got from the orginal airing (and the MUTLIPLE rematches I’ve done over the years), but also what I’m getting from the leaks from the reboot. Like- maybe friendship lasts or maybe walking away gracefully when a project isn’t for you is winning. I’m thinking about it all.

The orginal show had its issues, flaws, and I’m more able to see them the further away from my first viewing I get, but this show still means so much to me. Mainly as it was the first show where I felt really seen- and it felt like some of the choices I made in my young life (aka pursing acting and spending spare money on shoes rather than settling down) were ok.

Without further ado, here are my thoughts on Sex and The City I would love to know yours, and what this show meant to you, as well as your hopes and fears about the reboot!

Yes, my loves, it’s another take on Sex and the City Why did this one show affect so many of us so deeply?
It’s not just the amazing fashion that the show showcased; although, you could make the argument that it was the first fashion blog, and the fashion was fresh, amazing, provocative, and more than a valid reason to tune in. Blogs, Instagram accounts, my closet are a testament to the fashion presented. Manolos became a household name because of the show; it had an impact. I won’t go into the fashion here (though I will tell you I loved Man Repeller‘s take on updating Carrie’s best outfits), not because I don’t love it, but because SATC was so much more than fashion. (I also won’t debate Adian vs Big, because as someone who’s dated assholes, it’s some times nice to see an asshole change. Fiction is great!)

I was in my 20s when SATC came out (yes, I will still claim to be in my 20s, I’m great at math), and SATC was the first time I got to see a women centered show address women like me. Women who loved their friends, careers, and men, but whose love lives didn’t fit in the “box” imposed on them. You could argue that men and the characters love lives were the center of the show, but no one was rushing to be married at 25 with a house and 2 kids. I’m from the south, and at the time the show was first on I was an actress with 4 jobs scraping by in LA, most of my high school and college friends were married with houses. It was a breath of fresh air to reconginze myself in a TV show, and be told that all the things that I was (am) were reasons for celebration, not shame.
Not that marriage and houses and kids are bad, or not something that I want. But for a while in my 20s being single felt like a I was a side show and a show where single women (who were thriving) were accepted as normal was stunning. It made me feel as if I wasn’t making the wrong choice by pursing my dream and not doing things “the way” I was “supposed” to. Watching Carrie, Miranda, Samantha, and Charolette made me feel hopeful about my future, and even though I still tell dating horror stories, I felt like it was ok to have them- that I wasn’t some kind of freak! 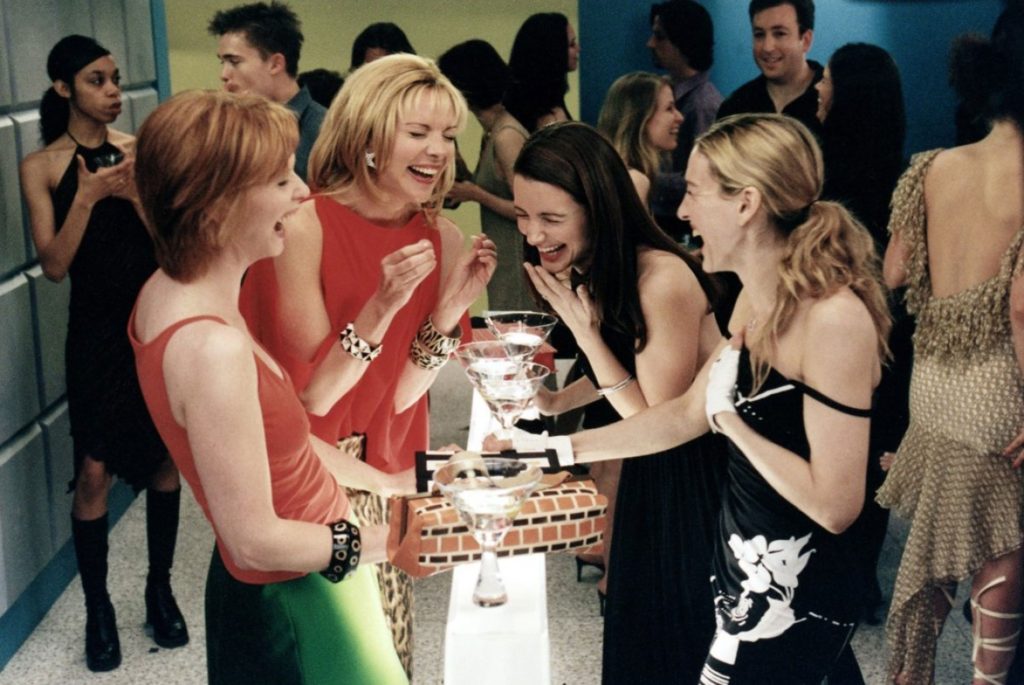 This show had such an impact on my life. While I could go on forever about why I love it, I will spare you. Instead I offer my main takeaways from Sex and the City. Yes, I may be trying to live my life like Carrie, but if it’s with the following lessons, is that a bad thing?

Female Friendships Matter
At the diner, after yet another breakup, Charlotte utters the enteral line, “What if we were each other’s soul mates? Then, we could let men be things that come and go”.
This line cut me, and has defined many of my friendships. Till this point, any show about a woman was about finding love; or the woman was already married, or a mother. How amazing is it to think that maybe the people to get you through your life are your friends? (And how true). Is it that the women on the show, or me, don’t want to find love? No, not at all. But maybe it’s the realization that no matter your romantic situation, the real loves of your life are the friends who come into your life and stay and love you. Seeing this spoken and shown repeatedly on SATC let me know that it was ok that I wasn’t married, and that being married isn’t the last word on being loved. This was revolutionary.

It’s Ok to Live Your Own Way 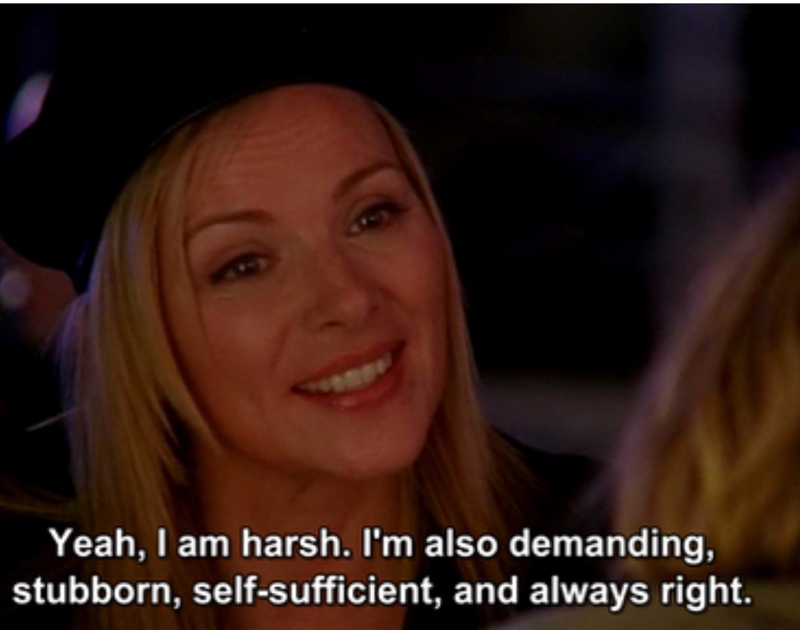 Women Not Apologizing for it. I loved all the things that the women on SATC refused to apologize for, from expensive shoes to sex drives to mixing shorts and fur coats. Have you ever counted how many times a day you say sorry? Or worry about how you’re coming off? Or maybe you apologize for making life decisions that are different than someone else’s? Seeing women owning who they were, and not being sorry for wanting what they wanted was eye opening for me. Related? Carrie’s career was taken seriously. To this day, there are times when explaining what I do is difficult. Both men and women can assume that I’m just “playing” and “not really working”. Do I have this career because of a TV show? No. But, seeing someone representing careers that I was pursuing being unapologetic about not having a “traditional” career or schedule empowered me. 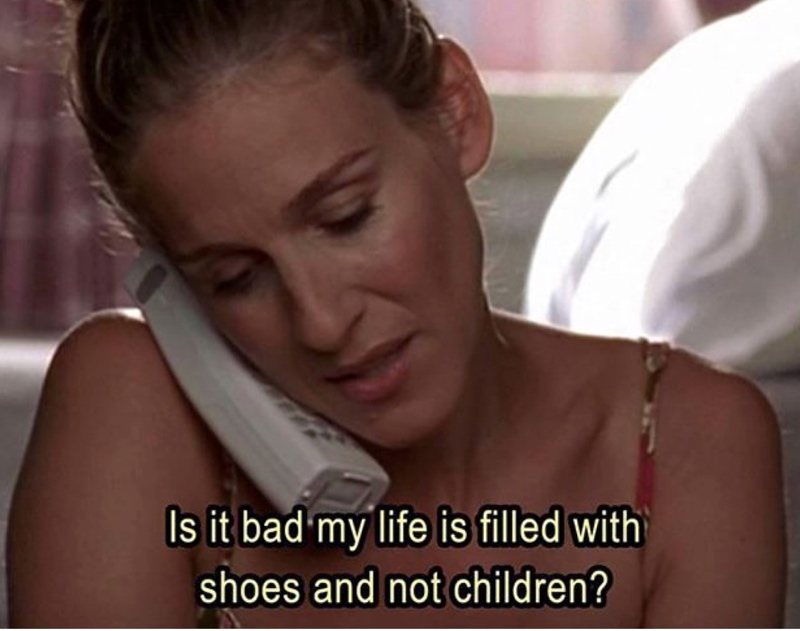 They questioned themselves. They questioned their friends. They failed, they succeeded. The women cried on each other shoulders and celebrated each other’s successes. They had bigger problems that just break ups, and sometimes things didn’t work out. My loves, that’s life. No matter who you are or where you live, there are issues (and not just of Vogue). It’s hard. We all mess up. Sometimes it’s ok, and sometimes it’s not. Carrie, Samantha, Miranda, and Charolette are the first characters I can remember not getting it right all the time, and not being villains. They were just figuring out their lives. Isn’t that what we’re all doing? And yet, did seeing women do it change things for you? It did for me.

I asked a question: Why did this show affect so manny of us so deeply? I have more takeaways, favorite outfits, favorite moments. Yes, the show was flawed and would be a different, more diverse show if it were done today. Yet, so many of us drop what we’re doing and watch it repeatedly. It sticks with us, we chat about it, talk about what character we are (my take: the ladies were almost archtypes and we all have a little of each of them in us). Why?

Sex and the City gave us women who were messy, complex, simple, searching, winning, failing, loving, fighting, and making it up as they went along. They were human, and all that goes with that label. I think this show meant so much to us, because we saw ourselves in it. And my loves, that is a beautiful thing.

I would love to know, are you a SATC fan? Why?

Wishing us all a week of messiness and amazing shoes! XO RA